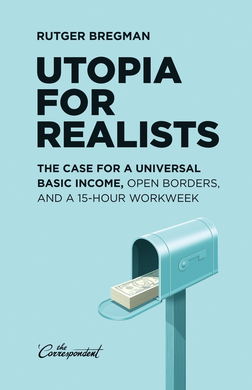 I read Utopia for Realists by Rutger Bregman. It has some controversial ideas. I had a blast reading it. He is exploring how we can make things better for humankind. Not that it’s not good for the average western citizen, but it is relatively easy to make it way better and save money doing so. The idea is to give everybody a basic income, free money. And ask nothing in return. I hear you think, that’s expensive, how do we pay for it? And will not everybody stop working?

Well, there were more than one experiment on this. Some in rich, western countries. Some in poor countries. Everywhere, people became happier, healthier and less criminal and there was generally no decrease of working hours. This makes healthcare cheaper because people are healthier. Also because people go to school longer, people end up in higher paying jobs, making them richer. People stopped worrying about money, were less stressed and therefore had more energy to raise their kids and choose to cook healthier meals.

Even more, it would make work so much more efficient. Think about it. You can now choose to do work that is actually meaningful instead of a bullshit job to pay the bills. It would give your life more meaning, making you happier with a greater sense of purpose. It would spark entrepreneurship like no other.

When you are without a job, right now it is seen that you are a failure. If you are given a financial support from the government, it is usually traded for your dignity and sanity. Here in the Netherland they will check your bank account to see if you are actually frugal, send a job coach over (like it’s your fault that you didn’t get hired for the position 200 other people applied for as well). There are a ton of things you have to do (sometimes including mandatory volunteering)  in order to receive some support to prevent you from getting homeless.

The experiment was done on homeless people as well. Give homeless people shelter and money to support themselves and ask nothing in return. That cost a lot. Nonetheless the savings were almost double the costs. It saved a lot of police deployment, healthcare bills, social workers and overall nuisance. Some of the homeless people started taking on jobs and took classes of some sort. The experiment, done in Amsterdam and other big cities in the Netherlands, was cut back when the 2008 crisis hit. Cheap turned out to be expensive in the long run as healthcare, criminal records and social work spiked again. I guess we’ll never learn.

Then there was the piece of cognitive dissonance. Bregman states that in an ideal utopia, we should open the borders of the western world to the rest of the word. This way, everybody who wants to can get rich and we will all be richer for it. If you close the boarders, economic refugees will cross them somehow, never to return. If you open up the boarders, the economic refugees will come, make some money and return home. There, they will lift their families out of poverty and the chain of poverty will be broken all over the world.

Opening the boarders should not be done at once all over, it will cause cultural trouble. It is, as Bregman states, a utopia to work towards. Depending on where in the world you are born decides if you can get rich or not. Keeping the boarders closed therefore is a discrimination of location.

All and all it was a very interesting book to read and I highly recommend you read it too! Also I am in favor for doing a big scale experiment on it. Not for one or two years, but try it for at least a generation and see where this is going. Or reform the whole tax system. Feeling fancy today!

What is our opinion on this? Did you read the book as well?

One thought on “Utopia for realists”